How we live: House tour, part 1

I admit that I like to know how people live. What they do. Where they go. Just normal stuff through the day. I’m curious about these things. Not like in a creepy kind of way, but I’m a people watcher. I like public places partially for the ability to just observe people.

I’m the one who always checks out the background of other bloggers’ pictures, just trying to get a peek at their house, or their office. I’m just curious like that. It makes me feel like I know a person better to know a bit about their house.

So to start off what I hope will be a little string of posts… ahem, hint hint…I’ll share where we live. Along with a bit of commentary of some interesting (?) things that I only noticed when I looked at the pictures after I uploaded them.

**Remember, you can click on the pictures to make them bigger.**

Here’s our house. All 800ish square feet of the main floor. 3 bedrooms, 1 bath. Kitchen, living room. That’s it. There is a partially finished basement, which is all M’s domain. 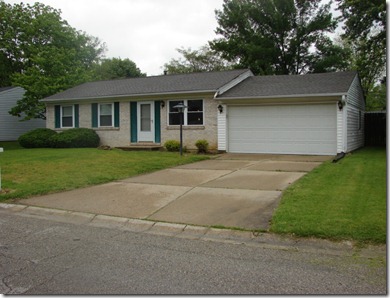 Wow. I still am amazed at how well we do in so much less space than we had before. With only 2.1 in our family back then.

We generally enter our house from the garage. (We are big believers in parking in a garage. I don’t understand people who don’t/can’t park in their garage… that’s what it’s for. )

Entering from the garage, this is the view. The kitchen. It’s a tight fit to get in due to the basement door on the left and the sliding door to the deck on the right, but once you squeeze past into the kitchen, it’s not too bad. 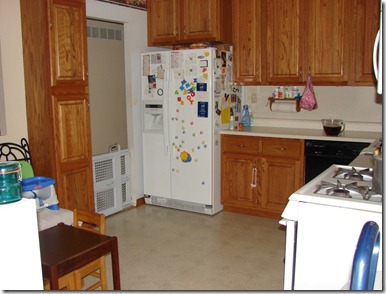 Note the crazy letter-covered fridge. I always swore my fridge would remain tidy. And I still try. But alas. There’s the oft present bib hanging from the cabinet handle, and there’s freshly-microwaved tea on the counter waiting for it’s finishing touches.

This is the view back from the other doorway to the kitchen. The garage door is on the far right end. 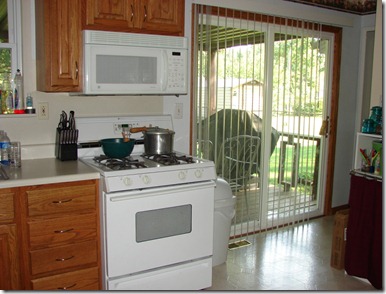 The grill is out on the deck. It’s handy. Yet we rarely use it. I could grill out every day. But it really only gets used if we have company. We have a good area outside, though the covered deck is rickety and not safe for the girls. But still… Unfortunately, our neighbor has a bar in his shed—you can also see the shed past the grill—and it is very popular with his friends. VERY popular. So it’s not really the most family-friendly environment. Anyone want to donate a privacy fence?

Here’s some of the deck… this table used to be by our pool back in Champaign. It’s used about once or twice a year now. Kind of sad. Especially since it is our only table and chairs… 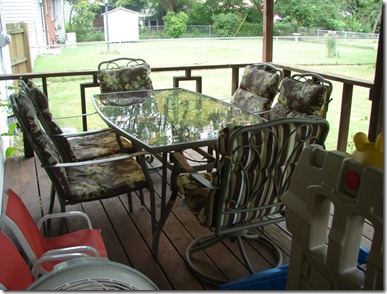 The deck isn’t usually this crowded with the little chairs and the slide and a fan, but it was supposed to rain, so I quickly collected everything up under the covered area instead of putting it back where it goes in the garage.

This is the backyard. The deck is to the left of the picture. The girls’ swing and Daddy’s hammock under the big tree. There’s room for a pool on the left side of the yard…but not sure we’ll do that again. 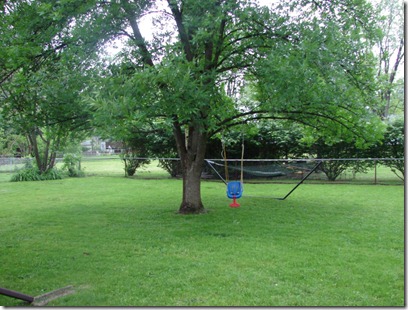 This is the kitchen waiting room. Or that’s what I call it. This is the “eat in” area, except that we don’t eat in here. The girls do. I sometimes eat while I’m feeding them. That’s about it. The little table and chairs is the snack area for the girls. 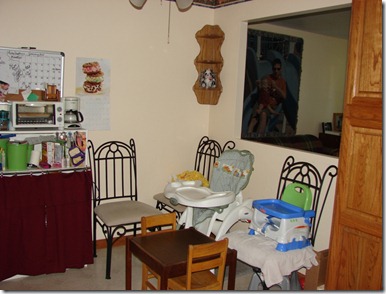 That little oak thing on the wall in the corner came with the house. I am a little surprised I’ve never taken it down. But I’m more surprised that there’s a stuffed panda bear in a decorative metal basket that is sitting on the shelf—like the bear is in a shiny cage—and it’s been sitting there since we moved in. Really sad.

And the bookshelf to the left is being used as extended pantry/countertop space. The bottom two shelves are covered with a “curtain” of pillowcases. They were cheap. And no, they’ve not been previously slept on.

If you could see the white board calendar clearly you’d see that the calendar part says January 2010.

But wow, how glad I am that we put that hole in the wall. It makes such a huge difference in the way things feel… if you weren’t around 2 years ago, here’s how it used to look.

Here’s the other side of the new opening. We recently rearranged a little, after I cleaned the carpets last week, and now the girls have a new place to climb and watch Mommy work when they’re gated out of the kitchen. This is the view from the front window. Climbing in progress. 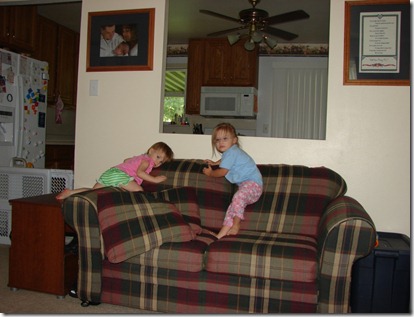 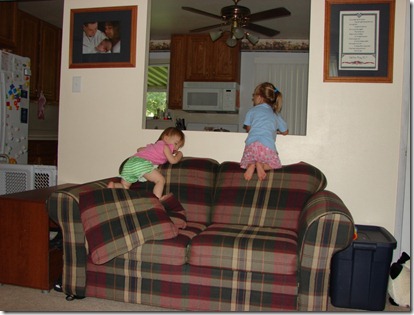 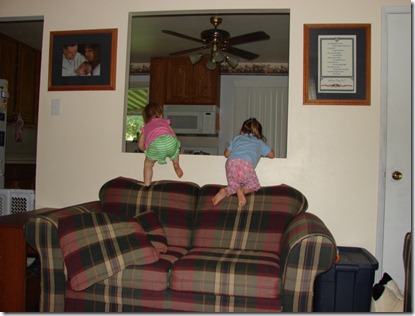 On either side of the opening between the living room and the kitchen are about the only pieces of wall art, other than the great big picture blanket you’ll see below, that we have in our entire house. I’ve just not ever managed to get the decorating thing together in the two years we’ve lived here.

On the right side is the cross-stitch that M used to propose to me. (Story here if you’re interested) On the left side is our first professional family picture—and the ONLY one we’ve had, now that I think of it—which was done when Braska was 6 months old.

This is the view from the kitchen into the living room. 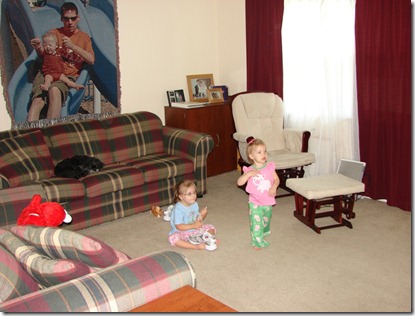 The TV is to the left of this picture. The front door is just to the left of the window behind the curtains. The furniture in plaid was given to us by my generous in-laws and the glider/ottoman was a gift for Braska’s nursery from our very dear more-family-than-friend Miss Karen.

The picture blanket is really neat to have. It was a present from M back in March 07 (though I didn’t actually send the pic in to have the blanket made until September 07). The picture is of M and Braska going down a slide at an extended family gathering in Iowa over Labor Day weekend 07. I loved the colors, and the faces, and I knew it was what I wanted to use. It will be Braska’s someday for her to keep.

There used to be a wall full of fireplace and cabinets on that wall where the blanket is. (Reference here if you missed it. Here’s the after.) It is one of the best decisions we made about the changes we did to the house after we moved in. I can’t imagine having to deal with having even less space available if we still had the fireplace there.

Ok, that’s enough for now… this is plenty long. I’ll continue with the rest of the house soon. Grab some cold drinks and appetizers from the kitchen while we take a short intermission.

Anyone wanna join in the fun and share a peek into your house, office, or whatever? I’m always interested! Don’t forget to let me know so I can come take a look.