Sunday the 18th, we got up, very stiff from a night on the floor, and began the last leg of the house-prepping journey. We loaded our suitcases and such into the cabs of the trucks, using every last space. We boxed up the last few items that we needed, cleaning supplies, etc. M and Braska left about 9 am to head on. Mom and I figured we'd be along in about an hour. Close to 2.5 hours later, we finally were ready to jump up in our trucks and take off. We formed our two-part caravan and took to the interstate. The trip went well overall, though I don't plan to trade in my car for a moving truck for everyday driving in city traffic. No thanks.

M got to the apartment office and signed the lease then he and Braska went to hang out in an empty apartment. My sister Rachel came over to keep them company a bit since we were so late in coming. (She was just showing off her fancy new Acura and all it's fun toys...that's always a good way to pass the time. :o)

When we got to St. Charles, Mom got off at one exit, and I went on to the next. She went to the storage unit where Patrick, Rach, and my brother Jody were waiting to help with the unload of that truck. I went to the apartment where my in-laws and M were waiting and ready. Later we were joined by M's brother Ethon and some very wonderful friends from the in-laws' church. AWESOME helpers they were!!! And even after following some very bad MapQuest directions. (Hint: Don't use that to come to our place...just call for directions.)

Within 3 hours, both trucks were unloaded--save one piece of the sectional that wouldn't make the corners necessary to get to the living room. We took the stubborn couch to Jody's place to park it in his basement for a bit since the storage unit was quite full. Both trucks were unloaded and returned in less than 4 hours. Not bad at all! We couldn't have done it without so much great help!

So on to some pics.... here's what the living room looked like upon move-in. 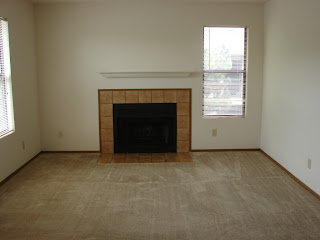 This is the living room and dining area a couple hours later. Box city. 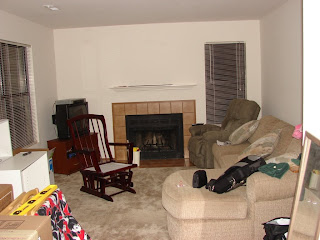 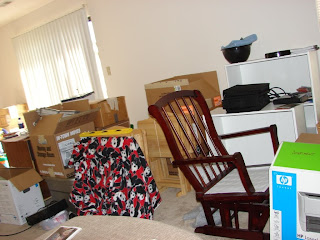 Then this is a couple days later, after a bit of arranging and some boxes gone. Still some to go. Notice that there's not much decor except for some items propped on the mantle. No need to put holes in the wall for this short a time. 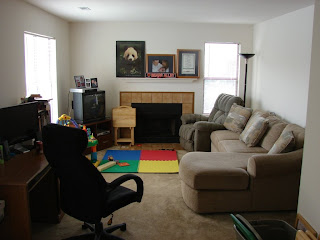 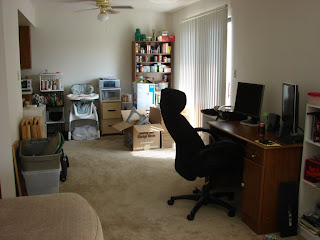 You'll notice that the dining area is nonexistent. We didn't even bring our table and chairs. Can you tell how much we use it?!? So sad. The back wall is used as storage for some of my office items that I need and a make-shift pantry of sorts. For now, it will work.

In three months, we do it all again. But I'm not thinking about that now. I'm going to bed instead.