It’s been about a year or so since Kinlee was last in an indoor fast-food type playplace. The enclosed kind.  Where I can’t really get to her when she refuses to come down.

Which is what happened and why I banned the practice.  I bribed a 9-year-old to go up and shove her down the slide last time (fries!) and I told Kinlee there would be no more for a good long time, at least til she was 3.  And I do not waffle on such promises.  Granted, we don’t ever come to these places unless it’s on purpose for play, so it was easy to fully avoid.

Recently, she was asking if she could try again. She remembers well what happened way back when she was 2.  She can recount the whole story clearly if you ask.  She will conclude by saying she “made a wrong choice and didn’t obey, so I don’t get to have fun there anymore.”  We talked about how, since she was 3 now and was learning to obey better and make right choices, maybe we could see if she was ready to try again.  She didn’t beg, and she didn’t whine about it (hooray!), so we tabled it and I said I’d think about it.  She was good with that.

So for about 4 days, we’ve been discussing that Tuesday morning after we dropped Braska at ESY (Because SHE does not get to play in these things.  That kid will NEVER come down.) we would have a special Mommy/Kinlee morning to go try and see if she can be a big girl when it’s time to leave a play place.

She’s been rehearsing the rules about coming when I call her, being a good friend to the other kids, and leaving when it’s time without a bit of a fuss.  She says she’s ready.  So she’s playing with the 3 other kids here, having a ball.  Running around like crazy, then coming to tell me who did what, thanking me for letting her come to play, then going up again.  (When we first arrived, no one else was here.  She wouldn’t go up because it was too scary, but when the other kids came in, she said she would go with them and not be afraid.)

I’ll give her a while to play, while I try to catch up on posts for B’s blog.  Then we’ll test out the new exit response.  I’m hopeful, but not blindly optimistic.  She knows if she throws the slightest fit, we’ll be absent from this kind of place til she’s 4. (As if you didn’t already know I was a meanie mom, right?!?)

For now, it’s all smiles and fun.  Even though she’s only barely tall enough to make it up there to start with… I hope this is the first of many enjoyable playtimes in the next chapter of her little big girl life. 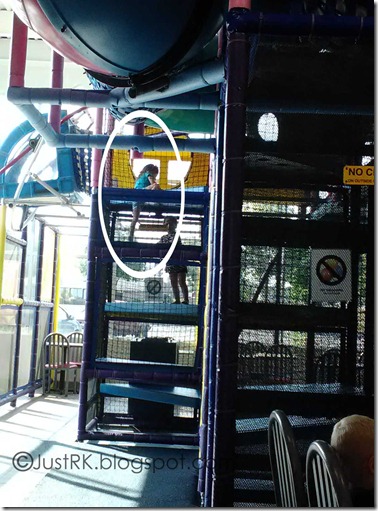