For a long time it was only for iPhone users, which I refuse to be, so Instagram was out of reach, and I didn't miss it.

But today I found out its only a free download away, and so here we are.

Now if only someone had been able to capture the fun I had on the trampoline with the girls today..... That would be priceless in any filter. 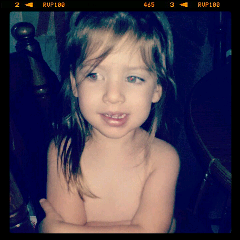 October 27, 2007
I have encountered plenty of people who ask "How old is she?" when Braska and I are out together here and there. They always guess her age about 5 months younger than she is, but that's ok, since that's what size she is. I have said several times that I can imagine it will bother me a bit more, although still not a huge deal, when she turns one next month and I see their reaction to that, as she still is in her car seat/carrier when we're in a restaurant or in a store since she doesn't sit up. Today, I met some friends for brunch. The waitress was a nice enough, very young girl, and she started cooing at Braska right away. That's nice. I don't mind, Braska likes the attention, and I'm proud of my cutie. The waitress asked her age, and I told her 11 months. She then said, "But she's not walking yet?" as she noticed that she was up to the table in her car seat/carrier. I just agreed and said, "Not yet." She said she
11 comments
Read more