May 22, 2013
If you follow me on Twitter (@mom2braskakiki) you know I've been doing C25K for a couple weeks now. I'm surprised at how well its going. By that I mean that I'm able to complete the interval jogging/walking as told to me by my app, C25Kfree.  But more than that, I'm surprised at how much I'm wanting to run.

Those of you who have been in my inner circles over the last decade or so have probably heard me say, "I really want to WANT to run."  That means I know the health benefits of good exercise, I like the idea of just stepping out the door and taking off, but I have never had the least bit of oomph to do it.

Plus I have bad knees from old sports (and growing) injuries, and various other ailments that make running difficult.

Yet I know lots of people who run. Not all of them love the activity itself but yet they have some kind of passion for doing it anyway. And most of them are very fit.

I am not. I have lost much of the momentum that I had last year, and after being so hard core nutrition/personal trainer focused, I stopped. In October. Life took over. And fitness dwindled once again.

So, spurred on by a few key friends who I rarely or never see... Hi C McD!... I downloaded the free app and said what the hey. Let's see if I can do it.

And so far,  I have. I count that a win. And progress toward the next one.

So tonight I type this on my phone, sitting in the cool air, in almost full darkness and serenaded by a cricket just down the sidewalk, done with another run, and enjoying it. 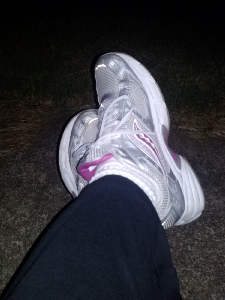